Central Business Improvement District commissioners have proposed a 0.8% assessment for all property owners in the district. The purpose of the proposed assessment is for the district to collect roughly $300,000 per year for landscaping, maintenance and hired liaisons for visitors and business owners in downtown, according to a city news release.

The assessment could be raised to 1% but also lowered if the budget is healthy. It also caps assessed value per land parcel at $10,000, according to Deputy City Administrator Jeff Dingman.

For the assessment to pass, property owners representing more than 50% of the assessed value in the district will have to submit petitions for it, the release states.

Sarah Sparks Diebold of The Majestic argued the district could “raise all the money in the world” for these initiatives but won’t achieve long-term change in downtown without addressing truck traffic and the homeless population. Dingman said district commissioners, the city streets department and Arkansas Department of Transportation are all aware of the issues. He said neither issue has an “easy answer.”

Dingman said the liaison program, called an ambassador program by district commissioners, is partly designed to address concerns about the homeless population. He also said the liaisons will help advertise and promote downtown.

The program would pay for at least two liaisons in downtown at all times, Dingman said. Fort Smith Police Chief Danny Baker said the liaisons would be managed by the Police Department.

Baker said his department has dedicated an officer around the clock to the downtown area, even with shortages on the force. But he said an ambassador is the best long-term investment to achieve oversight for the area.

An ambassador’s entry-level pay would be around $60,000 with benefits. Fort Smith police officers cost $76,000 to employ with benefits, Baker said.

Sandy See of See’s Seafood, located just outside the district on Towson Avenue, was concerned with how the city’s and Department of Transportation’s renovation of Towson Avenue would conflict with landscaping and maintenance efforts north of Dodson Avenue. The city in 2019 came to an agreement with the Department of Transportation to improve sidewalks, drainage and pavement on the thoroughfare that runs into downtown. The road will then be under city jurisdiction.

Dingman explained maintenance would happen every year because the assessment would be annual.

“This is the Clean and Green. We’re not highway, and we don’t fix roads. So we’re going to wait on the city to do that, and we’ll make sure when we do our planners that we don’t plan it before they go and tear up the road,” commissioner Phil White said in response to See.

Mike Billingsley, whose wife owns property in the district, asked if there is a plan for landscaping if the assessment passes. While commission chairman Bill Hanna said there is no landscaping and maintenance plan currently, he said he expects it will be “over and above” what they currently have.

“Between now and the time when this is passed and collected, we will definitely have that. What’s that going to look like? We’re not entirely sure,” Hanna said.

“There’s been so many plans, why do another plan unless we know we’re going to be able to do it?” White said. “We know that money can be spent, and it would take a lot more to do everything, but we can make a difference over a few-year period.”

White said the plans for the program are derived from the city of Little Rock. He said commissioners have studied the cost and effectiveness of such a program through this example.

White said all money raised through the assessment would stay in downtown.

Commissioner Steve Clark argued improving downtown will help the city will compete for jobs and thus help the economy. He said downtown will only be as good as its property owners want it to be.

“You’re going to have to have a little trust in us that we’re going to do the right thing, and if we don’t do a good job, come tell us,” White said. 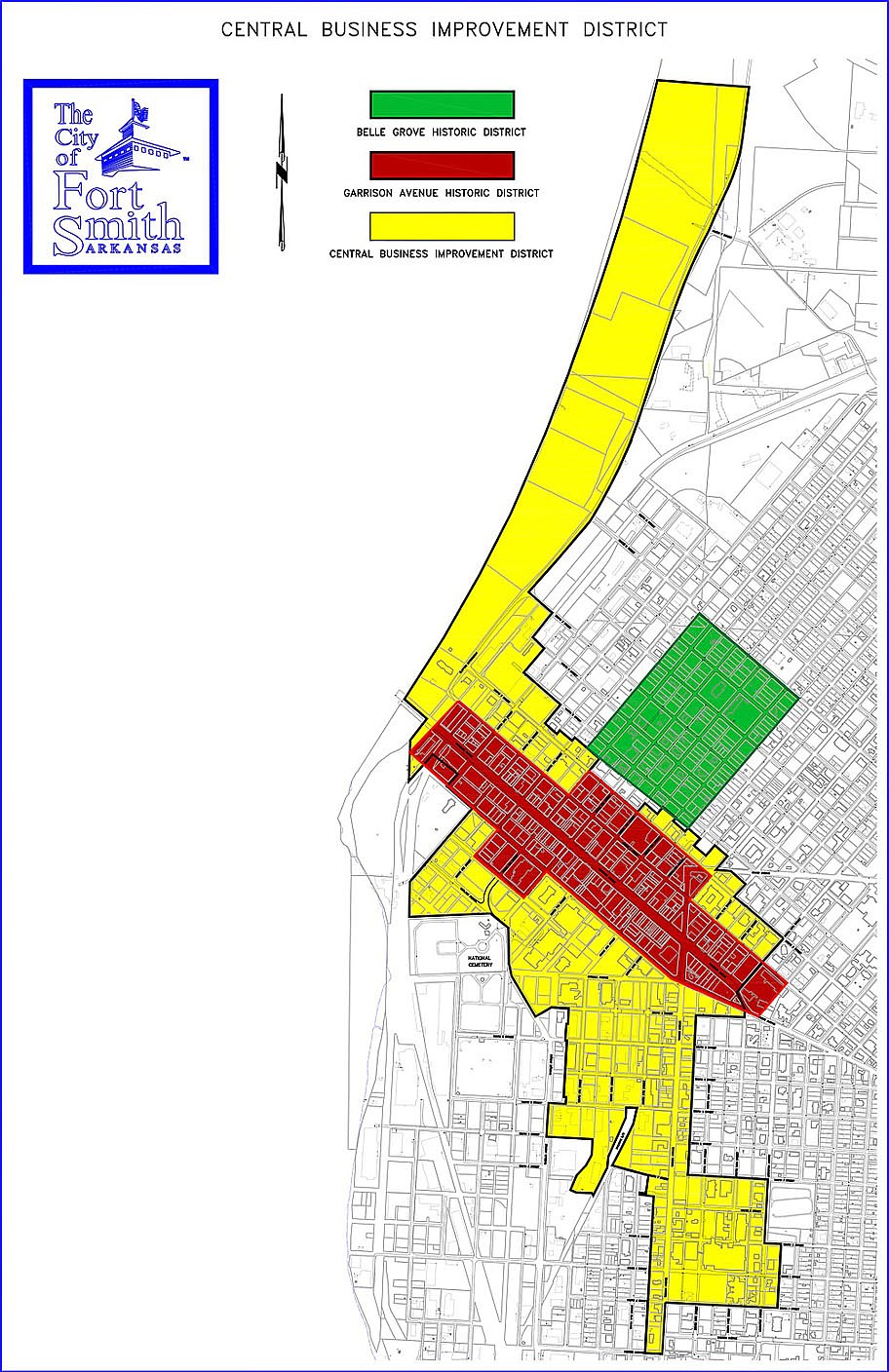 A map of the downtown Fort Smith area and its districts is seen. The yellow boundary represents the Central Business Improvement District.


History of the district

The Central Business Improvement District in Fort Smith encompasses virtually all of the city’s downtown. Each of its commissioners are required to own property or to be officers or stockholders of a company owning property in the district.