Programming Note: “Punching In” won’t publish on Labor Day. We’ll be back on the clock Monday, Sept. 13.

Ben Penn: Republicans may not have the votes to block union-bolstering provisions that Democrats aim to include in the budget reconciliation package, but don’t expect the GOP’s business allies to stand by and let Democrats weaken employers’ longstanding leverage in labor relations.

Industry lobbyists—and the general public, for that matter—don’t know exactly what will be included in Democrats’ $3.5 trillion domestic policy package, which can be approved without Republican support. House and Senate committees are moving quickly to draft the legislation over the next few weeks.

Yet early reports about labor provisions in the bill are troubling the business community, giving lobbyists reason to work their connections with moderate Democrats.

As this letter to Democratic leaders from the HR Policy Association attests, industry organizations are trying to amplify their messaging on workplace policy components they want excluded from the measure.

The group, which represents Fortune 500 companies, argued against including the labor law overhaul known as the PRO Act, saying it would keep the current “adversarial” labor relations system “while significantly tipping the balance towards unions.”

To be clear, the Biden administration and most Democrats are coordinating with unions, not CEOs, as they try to maximize their ability, within the constraints of reconciliation rules, to enact structural labor law reform that offsets decades of declining union membership.

But the Senate parliamentarian can strike provisions that are too policy-focused and lack a close relationship to the federal budget. That gives business groups a possible avenue of influencing the outcome.

The business community is targeting, in particular, Democratic plans to establish first-of-their-kind monetary penalties against employers who violate workers’ rights to organize. 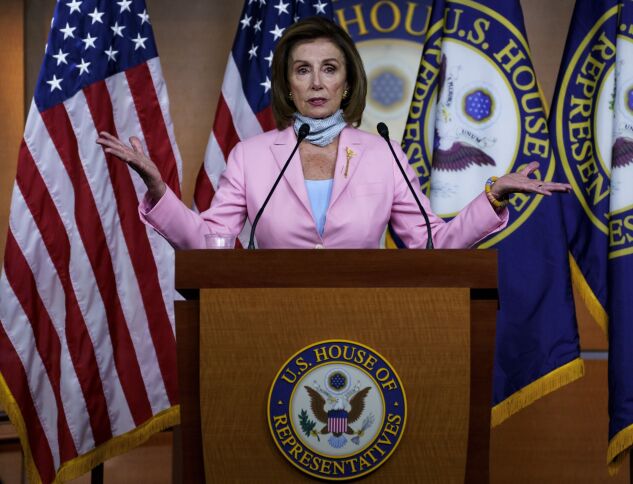 Speaker Nancy Pelosi (D-Calif.) speaks during a news conference at the U.S. Capitol on Aug. 25, the day after the House adopted the $3.5 trillion budget reconciliation framework.

Business organizations such as the U.S. Chamber of Commerce have a much different take, which they’ll be promoting on Capitol Hill in the next few weeks.

“There have been a number of instances where increases in penalties were included in reconciliation; but the key word there was increases,” said Glenn Spencer, the Chamber’s senior vice president of employment policy. “I have not seen yet an example of where a whole, brand new penalty structure that didn’t exist in current law was added in.”

Spencer added, “You’re changing the nature of the statute from remedial to punitive.”

Austin R. Ramsey: When the Senate returns from recess in September, the U.S. Labor Department is hoping the waiting game will end for a handful of nominees, though the jam-packed schedule doesn’t bode well.

There’s David Weil, the pick for Wage and Hour Division administrator, who needs the full Senate to vote him out of committee. Doug Parker, the president’s choice to lead the Occupational Safety and Health Administration, and Raj Nayak, the nominee to run DOL’s policy office, have been waiting for floor time since clearing committee June 16.

Gomez has yet to receive a committee hearing.

Under the normal playbook, if she’s confirmed, the storyline would be about the Biden administration reaching a turning point in implementing its employee-benefits agenda.

Yet one of the quieter storylines at the Biden DOL is how EBSA has taken action in the absence of a Senate-confirmed leader.

“The Biden administration from day one had people in place at EBSA who knew what they were doing in terms of how to make the agency run and who were connected with the policy goals of what the Biden White House were,” said Brad Campbell, a Washington, D.C., partner with Faegre Drinker Biddle & Reath who served two years as assistant secretary for employee benefits under former President George W. Bush. “And they immediately started working to achieve those goals.”

That’s manifested in expeditious regulatory moves to reverse Trump-era policies and set the table for Biden branding on key issues such as environmental and socially conscious investing and retooling the definition of fiduciary advice, Campbell said.

The agency had spiked Trump’s ESG and proxy-voting rules by March, issued guidance on the fiduciary rule by April, and begun a crackdown on third-party cyber practices by May.

Running that show has been Ali Khawar, a career EBSA staffer who advised the Obama administration’s employee benefits chief. Biden’s team was quick to give him the reins, first as principal deputy assistant secretary on Inauguration Day and then as acting assistant secretary two months later.

“This EBSA has been cautiously forward-thinking,” said Gary Blachman, a Chicago benefits attorney who served as a regional investigator for the agency earlier in his career. “They recognized the playing field they were in quickly, decided what they were going to do and did it. Khawar is smart, and he was well equipped to do that.”

Gomez, whose nomination was sent to the Senate July 28, isn’t a Washington insider. She’s an atypical pick in that she’s a “true practitioner,” Campbell said.

She’s spent much of her career forging deals between major unions and their employer partners on multiemployer retirement plan agreements—a record that might help undercut potential GOP resistance to her nomination.

Khawar is expected to stay on as principal deputy assistant secretary.

Sky Could Be the Limit for Surcharges on Unvaccinated Workers

We’re punching out. Daily Labor Report subscribers, please check in for updates during the week, and feel free to reach out to us.